What we have learnt about the Zulu culture and the Zulu History has more often than not been described through the eyes of our former colonial masters, it is time for us to reclaim our heritage and rewrite our histories, the purposes of this blog is to examine the Zulu culture and open up debate and dialogue on its importance and impacts today.

Zulu Myths and legends/Dingane and the revolving chair 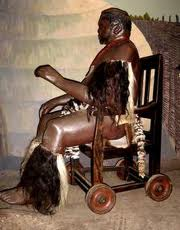 I’m sure most Zulu people have heard about the story of the wheel chair and king Dingane. It is said that during the reign of King Dingane a group of Boers sought an audience with King Dingane for some or other land concession, they spoke to him and a demarcation of land was agreed upon. When Dingane was about to point out the parameters of the land he was asked to sit down on a revolving chair, this chair was then spun around in an act of treachery by the Boers and it was through such actions that they lay claims on the Zulu country.

This of course is a story made to entertain, and has no real basis in reality, firstly the revolving office chair had not yet been invented during the 1830’s, secondly the Zulu kings were not prone to sitting just anywhere as their lives revolved around the magic of their muthi and the power to bind which they had, through their inkatha. It is highly unlikely that he would have allowed the Boers to make him sit on a chair that his “sanusi” had not inspected and from people he dispised and mistrusted.

The likely source of this myth may have come from a the story of King Mpande and the Norwegian missionaries which goes as follows;

In 1851 his majesty was ill with gout and due to his lavish diet he had become obese, not unlike what happened to Henry the eight of England, but I digress.

His majesty called all the izinyanga and diviners together to help with his predicament, none could help him adequately until one suggested the services of Schreuder, the Norwegian missionary whom he earlier had rejected when he requested to start mission stations in Zululand.

Schreuder then made a wheelchair made entirely out of wood for the purposes of carting the King around who was now too old and too sickly to move about.

In gratitude Mpande allowed Schreuder to establish mission stations in his Kingdom and it is said that he gave the missionary land at Empangeni and Entumeni which is how mission work began in Zululand.